The Book and other bits

Around the States in 90 Days

Determined to escape a 9 to 5 life but equally determined not to do anything socially worthwhile, Andy Moseley packed his bags and left for America. His plan was to see as much of the country as he could in 90 days.
In one of the hottest summers on record he got caught in more storms than should have been possible, accidentally commited three very petty crimes, appeared on the stage of a top TV sitcom, and got mistaken for both a serious art collector and a potential terrorist before returning home.
Around the States in 90 Days is the story of a journey across interstates, highways and dirt tracks, passing through cities, one horse towns, and no horse towns. Essential reading for anyone heading to America. Now available on Kindle from Amazon

James and Jennifer Rogers have been seeing a marriage guidance counsellor. When she tells them they should try something new, James decides this can only mean one thing - wife swapping. Not that he’d want the neighbours to know, and to keep his new hobby a secret he’s been trawling the internet to find a suitable couple for their first causal encounter.What he and Jennifer haven’t realised is that not everyone tells the truth online. They might be about to find this out the hard way when Peter and Annette Morgan enter their house.  Performed at Buxton and Camden Fringes 2013. 'An exploration of marriage (the institution), relationships (being married), gender roles, class, mores and more. Each is interwoven into a strong piece of theatre. The acting is assured and the direction crisp. It works very well. I can certainly recommend it to you' Buxton Fringe Review. For more information click here.

Are You Lonesome Tonight?

Dwight and Leanne Carter, are about to celebrate their 20th wedding anniversary, unsure whether they'll make it to the 21st.  Dwight has got them tickets for every date of the forthcoming tour by the man whose music brought them together - Elvis Presley.  Sadly for Dwight it's August 1977 and Elvis is about to leave the building for the last time.  Denied the chance to see him live, they have to decide whether to do the tour without Elvis, or go home to an uncertain future.  Performed at Edinburgh and Buxton Fringe 2011, and Brighton and Camden Fringes 2011. 'The life and death of Elvis informs the drama in a fascinating way. A very interesting performance' On the Fringe. 'A relevant look at fanaticism and the loss of one’s idols' Three Weeks.  For more information click here.

A Bridge Game Too Far 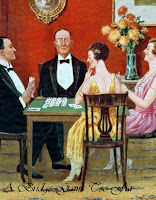 For the residents of a local retirement home, the weekly bridge game is more than just a way of life, it's a way of staying alive and staving off dementia, so when Mabel Shepherd announces she's sitting the game out for the night, the news travels fast as her fellow bridge partners plan their next moves and play their cards a little too far from their chests. A Bridge Game Too Far was inspired by a New York Times article about bridge players at the retirement community of Laguna Woods, California. The play won the 2011 Roy Purdue Trophy for new writing at the Roy Purdue New Playwriting Festival at the Orange Tree Theatre, Richmond. For more information click here.

Other blogs and websites to take you from this one